In June, Codegarden 2022 got off the ground, and it was once again with MCB's participation. This year's event was something very special, because we took home not only new knowledge and exciting ideas but also a special title.

Codegarden is Umbraco's biggest event which every year invites to knowledge sharing and networking. For the past 3 years however it has been canceled and held virtually like so much else due to the Corona pandemic. This year it was finally possible to hold Codegarden physically, and it is safe to say that the event returned in style.

Umbraco had created the perfect framework for immersing oneself in the universe and sharing knowledge and experiences with the large community. In the best way, this year it was even possible to participate both physically and virtually since all sessions were live streamed.

Despite social events with fellow Umbraco developers, new and upcoming features in Umbraco were presented where this year there was a particular focus on .NET Core / NET6 and Umbraco 10. In addition there was also a focus on the future of Umbraco's own products such as Umbraco Forms, Umbraco Cloud, Umbraco Heartcore and the updated Umbraco Marketplace. 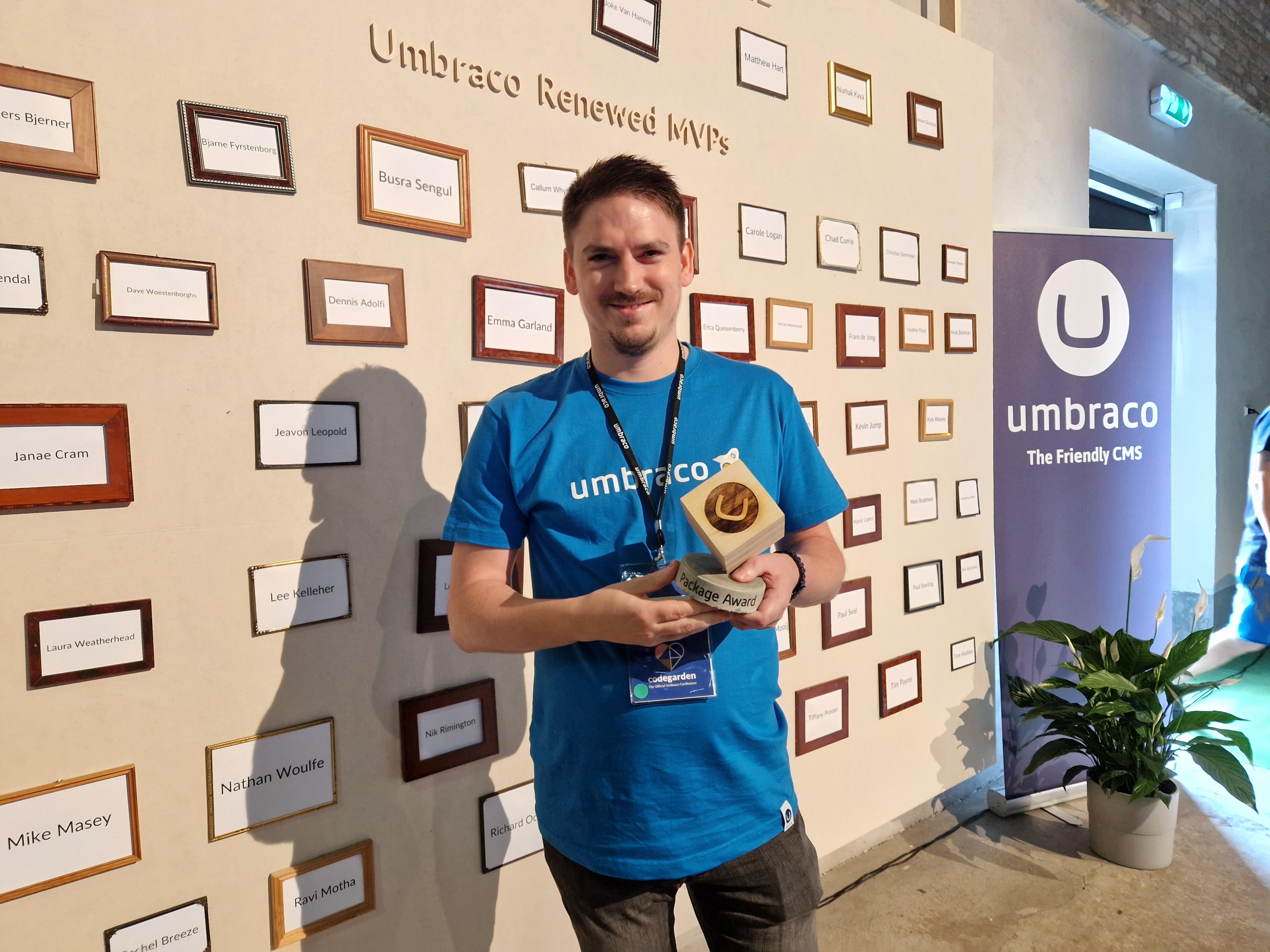 Despite some educational days our Umbraco developer, Bjarne, won a special award. He took home an award for his development and maintenance of several extensions for the ecommerce system, Vendr, for Umbraco. Among these extensions integration for payment gateways and drop-in module for product reviews with administration in the Umbraco back office have been handled. In addition, he has been active in sharing knowledge and experiences with the entire Umbraco community. The award was followed by nice words from the judges:

"Bjarne did a tremendous amount of work extending and improving an existing package and showed his passion in doing so. If anyone is deserving of this award, it’s definitely Bjarne, H5YR!"

Like the MVP, Package Awards are given to package developers who have made the development of an extension in Umbraco and thus also contributed to the Umbraco community. Therefore, it was another big tribute for MCB and especially Bjarne who already has the title of Umbraco MVP (Most Value People). 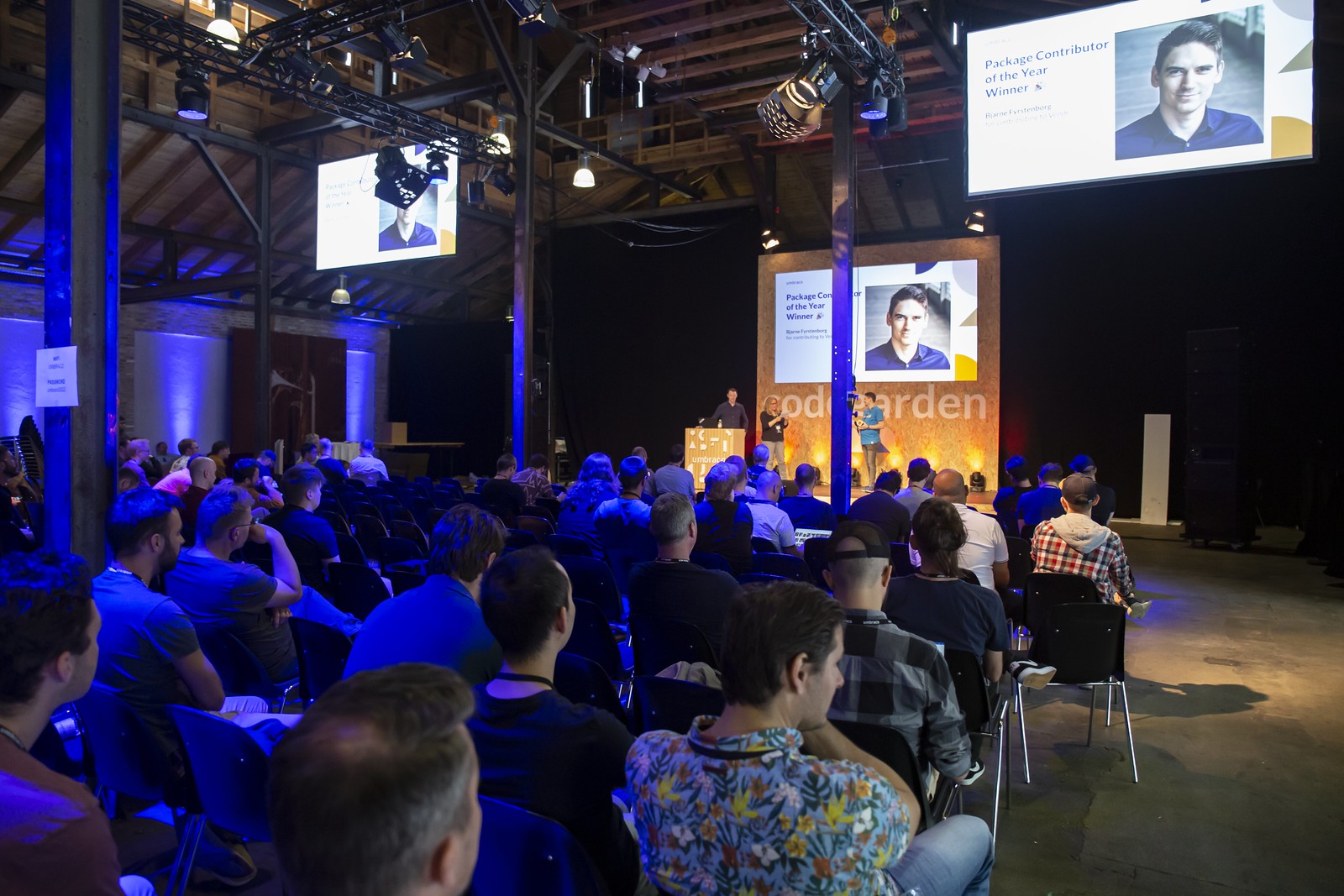 What does the Future Hold for Umbraco?

Umbraco is as popular as ever which Codegarden is a living proof of. At this year's event Umbraco also unveiled the future development of the platform.

Technologically, Umbraco is updated with the latest Microsoft .NET technology which means optimal performance and security.

In the latest Umbraco versions (Umbraco 8, 9 and 10) it is possible to build elements on the website in blocks or components using a block list editor. As the name suggests, the block is primarily intended to be in list format but work is now also being done on a block grid editor which provides better options for setting up components on a site in a grid format - This could an image in the left column and a text section in the right column or vice versa.

Unlike before, there are more frequent new releases for Umbraco which means that Umbraco is continuously updated in relation to technology, performance, and security. It also makes it generally simpler to upgrade from for example Umbraco 9 to 10 than it was from Umbraco 8 to 9. Therefore, it can be a good idea to upgrade your Umbraco solution to the latest version - both to be up to date on Microsoft technology but also to use the latest features in Umbraco as well as bug fixes and updates in relation to performance and security.

2. Improved module for processing images. Now there is support in WebP format. It provides a better image compression which also provides a better pagespeed score which is of decisive importance for the ranking on e.g. Google. On image-rich websites this can have a major impact on the user experience - especially for users accession the website from a mobile or tablet.

3. New features for Umbraco Cloud. In recent years, Umbraco Cloud has undergone a new infrastructure which provides new opportunities going forward. From the summer 2022 it is possible - among other things - to choose a US-based hosting region (so far only EU-based). In addition there are additional options for dedicated resources on the Umbraco Cloud.

4. New platform for premium apps: Composable DXP (Digital Experience Platform). Umbraco has been working on a new DXP platform for aggregating premium apps shared via the Umbraco Marketplace. Umbraco has always focused on making things more simpel, and DXP simplifies integration with popular apps and makes it easier to connect them to Umbraco. Initially, the focus has been on integration to well known brands such as HubSpot, Shopify, Semrush, Zapier og Google Search Console.

DXP therefore consists of various components within e.g. e-commerce, personalization/recommendations and marketing. These different apps will appear more clearly on the new Marketplace.

5. GraphQL on all Umbraco Heartcore. Umbraco Heartcore is a so-called headless CMS and is based on the same core as in the traditional Umbraco CMS where content and media are managed. It is a SaaS (Software as a Service), and therefore the software is hosted and maintained by Umbraco. The advantage of Umbraco Heartcore is that you are not limited to one channel, but you can manage the content for several platforms e.g. website and apps.

In addition, you get a predefined set of APIs to extract the data that is specially needed. THis makes it incredibly fast when you want a SPA (Single-page application) web aa, apps for mobile or another platform that content must be delivered to. GraphQL is a language for extracting exactly the content you want, and now this is an option on all Umbraco Heartcore plans.

You can read more about the Codegarden 2022 Keynote Highlights here.

Codegarden 2022 offered a lot of new knowledge and insightful sparring with the community. At MCB, we look forward to putting it all to use and letting it benefit our Umbraco customers. And we are already looking forward to Codegarden 2023.

Have you seen our Umbraco Academy?

Here you can read and learn much more about Umbraco

Why should you combine Hubs in HubSpot

With HubSpot CRM you get a complete package solution consisting of 5 Hubs to manage everything from marketing, sales, data to customer service. The 5 Hubs can be combined crosswise. Here you learn how.

When you start a webshop and want to sell online, you often think of selling physical products. But why not sell courses, memberships, rentals, and much more on a Shopify solution?

In June, Codegarden 2022 got off the ground, and it was once again with MCB's participation. This year's event was something very special, because we took home not only new knowledge and exciting ideas but also a special title.